How Do Modern Pumps Work?

When it comes to humanity’s most important inventions, pumps are often overlooked.  Pumps of various designs have been used for thousands of years to move and transport water, allowing for easier access to water, better land management, and much more.

Interestingly, the basic principles of fluid pumping haven’t changed much for centuries.  While we’ve developed new and more efficient methods, many of the fundamentals have stayed the same.

A Brief History Of Pumping

The first types of water-moving systems were basic and straightforward, such as attaching a bunch of buckets to a pulley system.  Or the ancient Greeks had a sort of water screw that used surface tension to transport water upwards through the screw.

The first modern pumps came along in wake of the Renaissance after people learned how to create and manipulate partial vacuums.  They’d use air pumps to create vacuums that draw fluids up, then expel the liquid outwards.  As steam power became common, this process could be automated, creating the first industrial-scale pumps.  This same principle still powers many modern pumps.

From there, the venerable hand pump came into being.  Basic hand pumps don’t use a vacuum, they use a long cylinder with a series of valves on the top and bottom.  With each pump, air is forced into the bottom of the cylinder, then the top valve is opened, and the air pressure forces the liquid upwards.  After a few strokes, the water reaches the surface and begins to flow.

Centrifugal pumps work much like older vacuum pumps.  They utilize propellers – or, more specifically, impellers – which create areas of low air pressure within a tube, and this area of low pressure sucks in the water.  Then once the water nears the impeller, it’s expelled outwards.  Larger pumps for deeper wells may have several separate impeller chambers, to keep the liquid flowing smoothly.

Positive-displacement pumps, on the other hand, are variations of the hand-pump design.  They use mechanical methods to force air into the pump and physically push the water outwards.  Because they have fewer internal moving parts, they’re also better for thicker fluids like oil.

FloRight Pump & Controls is a pump distribution company with a wide selection of pumps and accessories, with options for every application.  If you need a pump, but aren’t sure which will be best, contact our experts for assistance.

How to Read a Vertical Turbine Pump Curve Chart 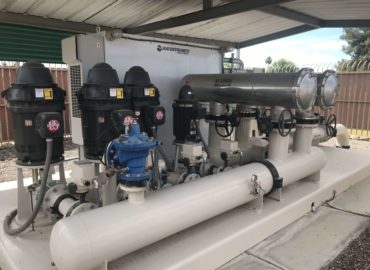 5 Reasons Preventative Maintenance is Essential for Your Pumping Equipment

It doesn’t matter if you run a high-volume water treatment facility or a...

Choosing Between A Horizontal or Vertical Turbine Pump

Centrifugal, or turbine, pumps are highly versatile, efficient, and found in a...

An Irrigation Preventative Maintenance Program Will Protect Your Golf Course

One of the most important components in a golf course is also almost completely...